A solutions architect is designing a solution where users will be directed to a backup static error page if the primary website is unavailable. The primary website's
DNS records are hosted in Amazon Route 53 where their domain is pointing to an Application Load Balancer (ALB).
Which configuration should the solutions architect use to meet the company's needs while minimizing changes and infrastructure overhead?

Active-passive failover -
Use an active-passive failover configuration when you want a primary resource or group of resources to be available the majority of the time and you want a secondary resource or group of resources to be on standby in case all the primary resources become unavailable. When responding to queries, Route 53 includes only the healthy primary resources. If all the primary resources are unhealthy, Route 53 begins to include only the healthy secondary resources in response to
DNS queries.
To create an active-passive failover configuration with one primary record and one secondary record, you just create the records and specify Failover for the routing policy. When the primary resource is healthy, Route 53 responds to DNS queries using the primary record. When the primary resource is unhealthy, Route
53 responds to DNS queries using the secondary record.
How Amazon Route 53 averts cascading failures
As a first defense against cascading failures, each request routing algorithm (such as weighted and failover) has a mode of last resort. In this special mode, when all records are considered unhealthy, the Route 53 algorithm reverts to considering all records healthy.
For example, if all instances of an application, on several hosts, are rejecting health check requests, Route 53 DNS servers will choose an answer anyway and return it rather than returning no DNS answer or returning an NXDOMAIN (non-existent domain) response. An application can respond to users but still fail health checks, so this provides some protection against misconfiguration.
Similarly, if an application is overloaded, and one out of three endpoints fails its health checks, so that it's excluded from Route 53 DNS responses, Route 53 distributes responses between the two remaining endpoints. If the remaining endpoints are unable to handle the additional load and they fail, Route 53 reverts to distributing requests to all three endpoints.
Reference:
https://docs.aws.amazon.com/Route53/latest/DeveloperGuide/dns-failover-types.html https://docs.aws.amazon.com/Route53/latest/DeveloperGuide/dns-failover-problems.html

A solutions architect is designing a high performance computing (HPC) workload on Amazon EC2. The EC2 instances need to communicate to each other frequently and require network performance with low latency and high throughput.
Which EC2 configuration meets these requirements?

Placement groups -
When you launch a new EC2 instance, the EC2 service attempts to place the instance in such a way that all of your instances are spread out across underlying hardware to minimize correlated failures. You can use placement groups to influence the placement of a group of interdependent instances to meet the needs of your workload. Depending on the type of workload.
Cluster ג€" packs instances close together inside an Availability Zone. This strategy enables workloads to achieve the low-latency network performance necessary for tightly-coupled node-to-node communication that is typical of HPC applications.
Reference:
https://docs.aws.amazon.com/AWSEC2/latest/UserGuide/placement-groups.html

A company wants to host a scalable web application on AWS. The application will be accessed by users from different geographic regions of the world.
Application users will be able to download and upload unique data up to gigabytes in size. The development team wants a cost-effective solution to minimize upload and download latency and maximize performance.
What should a solutions architect do to accomplish this?

A company has a legacy application that processes data in two parts. The second part of the process takes longer than the first, so the company has decided to rewrite the application as two microservices running on Amazon ECS that can scale independently.
How should a solutions architect integrate the microservices?

A company captures clickstream data from multiple websites and analyzes it using batch processing. The data is loaded nightly into Amazon Redshift and is consumed by business analysts. The company wants to move towards near-real-time data processing for timely insights. The solution should process the streaming data with minimal effort and operational overhead.
Which combination of AWS services are MOST cost-effective for this solution? (Choose two.)

Kinesis Data Streams and Kinesis Client Library (KCL) ג€" Data from the data source can be continuously captured and streamed in near real-time using Kinesis
Data Streams. With the Kinesis Client Library (KCL), you can build your own application that can preprocess the streaming data as they arrive and emit the data for generating incremental views and downstream analysis. Kinesis Data Analytics ג€" This service provides the easiest way to process the data that is streaming through Kinesis Data Stream or Kinesis Data Firehose using SQL. This enables customers to gain actionable insight in near real-time from the incremental stream before storing it in Amazon S3.

A company's application runs on Amazon EC2 instances behind an Application Load Balancer (ALB). The instances run in an Amazon EC2 Auto Scaling group across multiple Availability Zones. On the first day of every month at midnight, the application becomes much slower when the month-end financial calculation batch executes. This causes the CPU utilization of the EC2 instances to immediately peak to 100%, which disrupts the application.
What should a solutions architect recommend to ensure the application is able to handle the workload and avoid downtime?

Scheduled Scaling for Amazon EC2 Auto Scaling
Scheduled scaling allows you to set your own scaling schedule. For example, let's say that every week the traffic to your web application starts to increase on
Wednesday, remains high on Thursday, and starts to decrease on Friday. You can plan your scaling actions based on the predictable traffic patterns of your web application. Scaling actions are performed automatically as a function of time and date.
Reference:
https://docs.aws.amazon.com/autoscaling/ec2/userguide/schedule_time.html

AWS Global Accelerator -
Acceleration for latency-sensitive applications
Many applications, especially in areas such as gaming, media, mobile apps, and financials, require very low latency for a great user experience. To improve the user experience, Global Accelerator directs user traffic to the application endpoint that is nearest to the client, which reduces internet latency and jitter. Global
Accelerator routes traffic to the closest edge location by using Anycast, and then routes it to the closest regional endpoint over the AWS global network. Global
Accelerator quickly reacts to changes in network performance to improve your users' application performance.

An application running on AWS uses an Amazon Aurora Multi-AZ deployment for its database. When evaluating performance metrics, a solutions architect discovered that the database reads are causing high I/O and adding latency to the write requests against the database.
What should the solutions architect do to separate the read requests from the write requests?

Amazon RDS Read Replicas -
Amazon RDS Read Replicas provide enhanced performance and durability for RDS database (DB) instances. They make it easy to elastically scale out beyond the capacity constraints of a single DB instance for read-heavy database workloads. You can create one or more replicas of a given source DB Instance and serve high-volume application read traffic from multiple copies of your data, thereby increasing aggregate read throughput. Read replicas can also be promoted when needed to become standalone DB instances. Read replicas are available in Amazon RDS for MySQL, MariaDB, PostgreSQL, Oracle, and SQL Server as well as
Amazon Aurora.
For the MySQL, MariaDB, PostgreSQL, Oracle, and SQL Server database engines, Amazon RDS creates a second DB instance using a snapshot of the source
DB instance. It then uses the engines' native asynchronous replication to update the read replica whenever there is a change to the source DB instance. The read replica operates as a DB instance that allows only read-only connections; applications can connect to a read replica just as they would to any DB instance.
Amazon RDS replicates all databases in the source DB instance.
Amazon Aurora further extends the benefits of read replicas by employing an SSD-backed virtualized storage layer purpose-built for database workloads. Amazon
Aurora replicas share the same underlying storage as the source instance, lowering costs and avoiding the need to copy data to the replica nodes. For more information about replication with Amazon Aurora, see the online documentation. 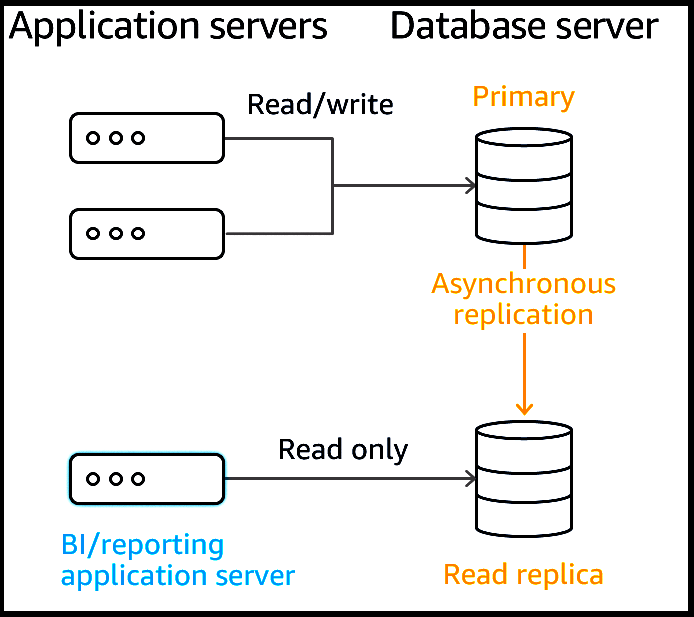 A recently acquired company is required to build its own infrastructure on AWS and migrate multiple applications to the cloud within a month. Each application has approximately 50 TB of data to be transferred. After the migration is complete, this company and its parent company will both require secure network connectivity with consistent throughput from their data centers to the applications. A solutions architect must ensure one-time data migration and ongoing network connectivity.
Which solution will meet these requirements?

Upvoting a comment with a selected answer will also increase the vote count towards that answer by one. So if you see a comment that you already agree with, you can upvote it instead of posting a new comment.

Is the comment made by USERNAME spam or abusive?

In order to participate in the comments you need to be logged-in.
You can sign-up or login (it's free).