Linux Vs. Windows: What’s the Difference? 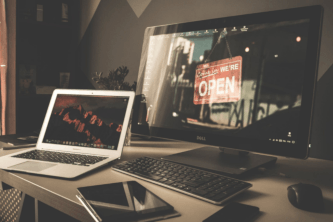 Linux, Windows, OSX, IOS, Android, and other titles often get thrown around when taking about an OS or operating system. It’s basic knowledge for ANY IT worker but you have to start somewhere! We made a basic guide for those who’ve always wondered, Linux Vs. Windows: What’s the Difference? In this guide we’ll walk you through the advantages and disadvantages of each OS and why you might find one OS being way better than another.

What is an OS?

An OS or Operating System is the foundational program that a computer runs. This program hosts the software necessary to use different devices (Such as drivers) and also allows you to access information easily. It hosts and runs hardware and software that allows a computer to function. The most basic OS will actually lack a graphical user interface (GUI) meaning that everything is done through text or symbols. If you’ve ever used an older computer running MS-DOS, that’s usually lacking a GUI. Advanced OS like Windows 10 will offer a host of very advanced features such as the ability to host a network and give people access credentials. They can run most modern AAA Games and adapt to numerous hardware and software installations. So, Linux Vs. Windows: What’s the Difference?

OS can be closed systems like OSX. Those are hard to make any changes to, most programs have to be ran through Apple, and they’re generally very stable. Windows is more open, and a mix of closed and open. Users can program and create a variety of programs to change things. Nearly anything on Windows can be changed or modified if Microsoft has allowed for it. Finally true Open-Source OS like Linux allow everything to be changed and customized. Absolute freedom, which can be good and bad depending on how knowledgeable the user is.

How are Linux and Windows different?

There are a ton of ways that they differ. At the base level though Windows and Linux do much of the same thing but Linux offers 100% user input and operation while Windows has “Guard rails,” built in. These guard rails are great for security but aren’t always the best for freedom. Linux offers immense freedom but isn’t always compatible with programs and can take a lot of work to make a Linux system nearly as efficient as a windows system. This freedom allows the creation of unique operating systems though based on Linux for in-house use at businesses and more.

Worldwide Windows is king. It’s hard to argue with them as having continually innovated and improved upon the OS they made years ago. From Windows 95 to Windows 10, many features have been innovated on and the Windows Eco-System allows a whole host of connections to external devices (such as a Microsoft Surface, Xbox, and more). Windows is Windows. It may come in different flavors but at the heart, it’ll be run through the requirements and specifications of Microsoft. So far they’ve done an amazing job and the OS has become less resource intensive, easier to scale, added amazing features, and done a great job at integrating with hundreds of programs. When you talk about Windows, you are discussing an Eco-System of devices and programs like Microsoft Office, Windows Server 2016, and much more that interact and work with each other VERY well.

A Kernel is a program that has absolute control over every facet of a computer system. This can be pretty catastrophic if used wrong or make amazing programs when used right. Linux is actually the Linux Kernel, a very basic program that allows immense control over technology. Linux in a broader sense now is commonly referring to several free OS that have been built from the Linux Kernel. Only 2.3% of computers use Linux as it isn’t easy to use for the average consumer. Despite this Linux has been used as the backbone for a ton of background systems like ChromeOS, TiVo, and Android. The prevalence of Android devices actually makes Linux the most installed Kernel in the world. Linux as an OS has to be built from the ground up and an amazing amount of users regularly update and release Linux software and more. The downside is that they don’t have the powerhouse development studios like Microsoft and Apple pouring thousands of man hours into quality control. Because of this Linux based systems like Android started wonky and prone to failure, until Google was able to make the solid OS it has today. Unix and other OS operate similar to windows but require a lot of user skill to work well. Linux offers free products that are similar to paid for products (Like Microsoft Office) but they do tend to be a bit more inferior. That being said, few OS can run so well with such few resources and nearly any device imaginable.

Which one is better?

Neither. They’re just different and at the heart of each OS is a different philosophy. From a neutral perspective, Windows is the best for gamers and businesses that are filled with everyday users. Linux is the best for creating unique OS options such as ChromeOS that allow low-cost devices to have modern functionality similar to a watered down version of Windows. Linux is also great for companies that may want a REALLY specific OS for a computer, such as medical transcription machines, or in-house databases.

If you still have questions, we recommend this deep dive into Linux right here!

If I want to know more, what should I do?

If you are getting into IT we recommend taking the CompTIA A+ exam. In it you’ll take two exams to get certified, 220-901 and the 220-902. The 220-902 focuses on Software and will teach you the basics of major OS systems, how they run, and what you need to know to work as a systems administrator with them. It’s a great option, easy to study for, and opens the path to some killer jobs! If you are still not convinced or have questions, try one of the online practice exams at examtopics. Not only are they absolutely free, they mimic the real-world exam closely and will help you decided if certification is for you! With enough experience you might be building your own Linux based system or running servers on Windows Server 2016!

It’s quite-often that people wonder, Linux Vs. Windows: What’s the Difference? Yet rarely is the answer clearly followed up. We hope you understand the difference a little bit better now and learned something from this guide. If you did, please like, comment, and subscribe to our updates! We love bring you epic articles on technology and the world of certification as often as possible. Until next time, good luck and keep learning!

The Top 10 Companies For An IT Professional To Work At